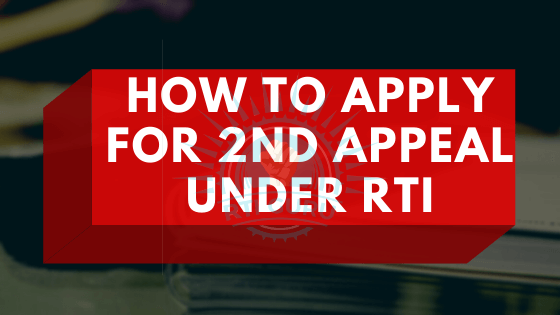 How to File 2nd Appeal under RTI?

The Right to Information Act lays down provision for the second appeal in cases once you are unhappy and dissatisfied with the choice given by the primary Appellate Authority. Information Commissions are found out in the middle and states for hearing such appeals.

What is the time-frame for creating Second Appeal?

A second appeal under The RTI Act 2005 against a choice of an Appellate Authority to information Commission must be made within 90 days from the date on which the choice should are made or from the date a choice was received. However, the Information Commission has the discretion to permit appeals after this era has expired if there's sufficient cause for such delay.

Who can make the second appeal?

Any person aggrieved by the order of the PIO can file the 2nd appeal. You'll also request your friend or an RTI Activist or the other person to file a complaint on your behalf provided he features a copy of all the relevant documents like RTI online Application, acknowledgement receipt, PIO reply, first appeal, the order of FAA, etc. The format of the Authorization Letter enclosed.

Whom should the Second Appeal be made to?

How to prepare the Second Appeal

The Central Government and a few State Governments have issued rules about what information must be included in an appeal to Information Commissions. However, there's no standard format for filing the second appeal. additionally to basic information about your application and the way it had been processed, your appeal should attach supporting documents, including self-attested copies of the orders/decision notice against which the appeal is being made; and copies of any additional documents you're relying upon which are mentioned in your appeal.

How to file the Second Appeal under RTI

Directly by handing them over face to face

Additionally, you'll also send the appeal to the APIO within the relevant public authority who then features a duty to forward it to the relevant Information Commission.

* Always retain one set of appeal for your record

**When you send your appeal by post, confirm that you simply collect the signed and dated postal/acknowledgement receipt of your appeal. Couriers should be avoided.

Apply For the Second Appeal

What is the prescribed fee for filing Second Appeal?

The Central Government has not prescribed any fee for filing a second appeal with the Information Commission. Unfortunately, some State Governments, like Maharashtra and Madhya Pradesh, have prescribed Rules which impose an appeal fee. Legally speaking, no appeal is often rejected or stalled on account of non-payment of fee towards an appeal. But if your government has prescribed an appeal fee, you'll either move the relevant Information Commission or your supreme court to think about an equivalent.

Disposal of the Second Appeal

The RTI Act doesn't provide for any procedure to be followed for deciding appeals. However, information Commissions must provide you with a chance to be heard before a choice on your appeal is reached. In any appeal, it's the PIO who must convince the Appellate Authority that they made the proper decision. As long as they create a defensible case, do you have to be asked to elucidate why you think that they're wrong?

The Central Act doesn't prescribe a deadline for information Commission to decide on an appeal and no deadline has yet been included in any of the Appeal Rules which are prescribed.[RULES ANNEXED] However, best practice would support a deadline of 30-45 days to eliminate any appeal a bit like the Appellate Authorities.

Proceedings before information Commission are informal unlike court proceedings and you would like not to hire a lawyer to plead your case before the Information Commissioner. An individual can assist you during the hearing and such a person doesn't need to be a legal practitioner. Usually, the appellant appears face to face and argues his case. He also has the freedom to seem through his authorized representative or opt-out of the course of hearings.

The burden of Proof: The burden of proof that the denial of an invitation was justified lies on the one that wants to stay information secret – the PIO or a 3rd party. In practice, this suggests that you simply should only get to interact with the Commission after the one that wants to withhold information has first been questioned because they're those who need to show information Commission that they're right. If a hearing is then organized, the PIO or third party asserting secrecy must be called on to form their case first. You’ll only get to make a case if the Commission thinks the PIO or third party features a point worth considering. At that stage, you then got to argue in favor of disclosure.

If an Information Commission decides that your appeal was justified, he may pass an order:

(a) Asking the general public authority to require concrete steps towards meeting its duties under the Act, for instance, by providing access to the information you requested, by ordering information be provided during a different form or by reducing the number of fees you would like to pay;
(b) Ordering the general public authority to compensate you for any loss you'll have suffered within the process;

(c) Imposing penalties on the PIO or the other officers who failed in their duties under the Act.

(d) If the information Commission decides that your case is groundless, it'll reject your appeal and provides you with a notice of its decision to you and therefore the public authority, which should include any right of appeal.